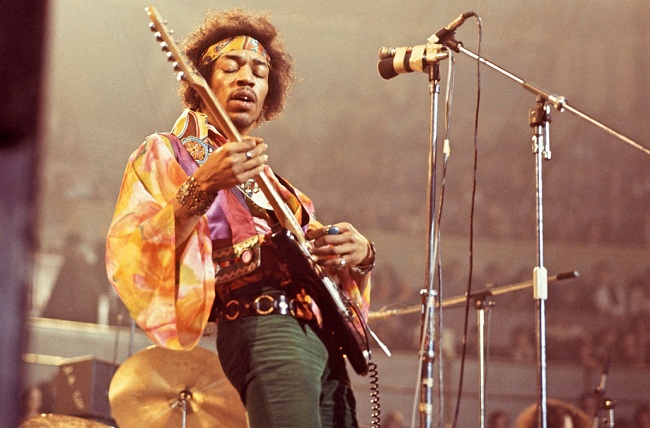 The final chapter of what’s being called a Jimi Hendrix unreleased-track trilogy lands March 9. “Both Sides of the Sky” features 10 recordings that the Hendrix estate says have never been released, along with three others.

Later in the year come the highly anticipated rereleases of the Jimi Hendrix Experience’s first two studio albums — “Are You Experienced” and “Axis: Bold as Love” — on the audiophile SACD format. “Axis” also will see a limited release on the Ultra High Quality Record vinyl format. Those rereleases will be remastered by Bernie Grundman “from the original analog master tapes” via Analogue Productions.

“Both Sides of the Sky” follows the Hendrix estate’s albums “Valleys of Neptune” (2010) and “People, Hell and Angels”(2013). Both of those collections of (officially) unreleased tracks were generally well received. The concept of an unheard-track trilogy — “featuring the best and most significant unissued studio recordings remaining in the Hendrix archive” — appears to be new, however.

The latest posthumous collection was recorded as random studio tracks by Hendrix and supporting musicians between 1968 and 1970. The guitarist died in the summer of 1970.

A handful of the tracks were recorded by Band of Gypsys, Hendrix’s trio with drummer/vocalist Buddy Miles and bassist Billy Cox. “The hairs just stand up right on the back of your neck” while listening, producer Eddie Kramer told the Associated Press.

Tracks include “Mannish Boy,” “Send My Love to Linda” and “Power of Soul” (Band of Gypsys), “Things I Used to Do” (with Johnny Winter), another “Hear My Train A Comin’” (Mitch Mitchell, Noel Redding), “Georgia Blues” (Lonnie Youngblood), and “$20 Fine” and “Woodstock” (Stephen Stills). There are also alternate versions of “Stepping Stone” and “Lover Man.” “Jungle” appears to be an early “Villanova Junction Blues.” Hendrix plays guitar and sitar on “Cherokee Mist,” backed by Mitchell. And there’s an instrumental “Sweet Angel” (“Angel”).

Expect the latest Hendrix archive album to be released on all major formats, including a double-LP album, via Sony Legacy. The Hendrix family renewed its licensing deal with Sony Music Entertainment last summer.

Hendrix’s music made its debut on the SACD format a year ago with the release of “Machine Gun: The Fillmore East First Show 12/31/69” and the rerelease of “People, Hell and Angels.” While artists such as Miles Davis and Frank Sinatra have been the subject of major SACD release campaigns, Hendrix’s catalog had remained mostly limited to CD, vinyl and regular digital files.

Release of the latest Band of Gypsys live set on SACD raised hopes that Hendrix’s classic studio albums would emerge in the audiophile format. No word yet on “Electric Ladyland.”

The “Are You Experienced” and “Axis: Bold as Love” SACDs will include both stereo and mono mixes, and will retail for about $35. Analogue Productions has not set a release date for the hybrid SACDs.

The UHQR vinyl release, “newly remastered by Bernie Grundman,” will be available as separate stereo and mono editions in deluxe boxes with booklet. Price is $100 and the discs will be available in “late summer” 2018.

Update: The mono UHQR version of “Axis” quickly sold out. The stereo remained on sale as of early February. /update

The UHQR format originally was introduced by JVC Japan in the 1980s. The Hendrix album will be cut into Clarity Vinyl, which skips introduction of the familiar black coloring.

“These are going to be the best records ever made,” said Acoustic Sounds and Analogue Productions CEO Chad Kassem. “To announce the series properly we wanted to hit a home run with a huge title, and I don’t know that we could have done much better than this.”

The UHQR and SACD Hendrix albums will be presented in their original U.S. versions.

Analogue Productions also teased upcoming SACD releases of Pink Floyd’s “The Dark Side of the Moon” and “Wish You Were Here.” They will contain stereo and 5.1 mixes. The Pink Floyd reissues appear to be less buzzworthy than the Hendrix titles because the Floyd titles have been rereleased in audiophile formats numerous times. They too are expected at some point in 2018.